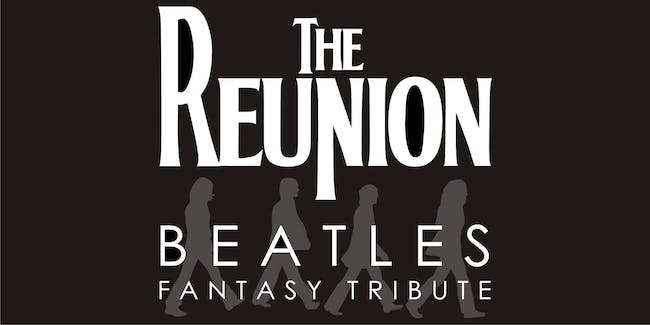 The Reunion - Fantasy Tribute to The Beatles

iCal
Google
The Beatles are back together. 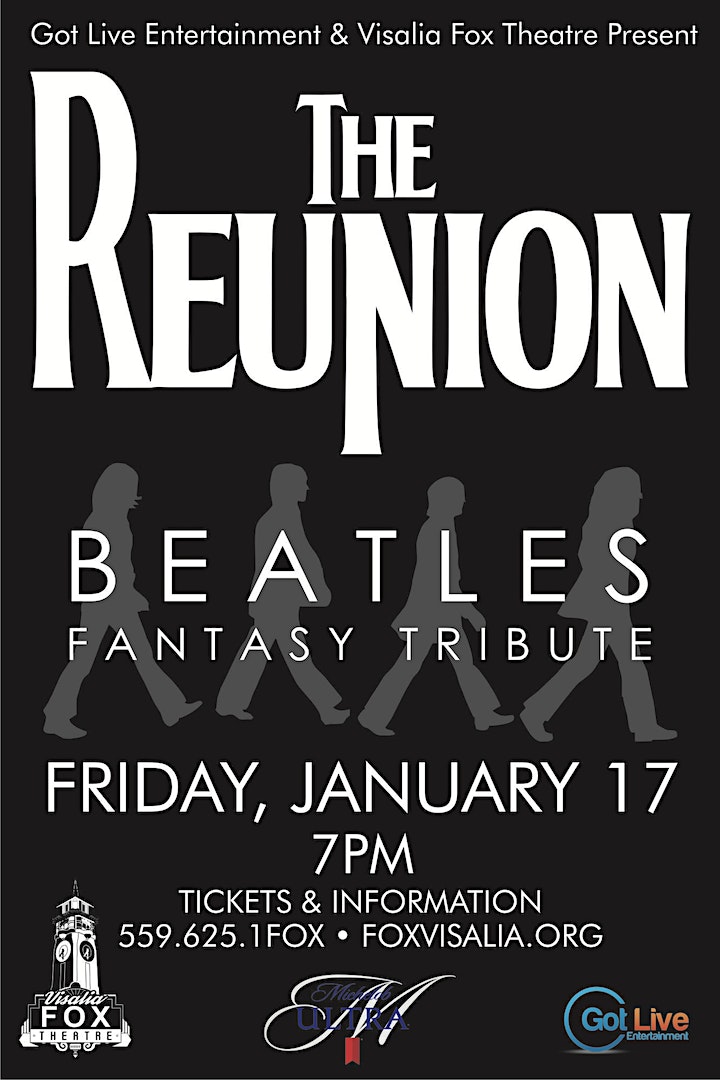 The Beatles are back together. Never mind that two of their members are no longer alive. The Reunion Beatles - Fantasy Tribute is the rock and roll reunion of all time: the concert that never was. In this show, John, Paul, George & Ringo are back together and celebrating with a concert that features their most memorable songs and solo hits.

Formed in the Bay Area in 2010 by Got Live Entertainment, The Reunion Beatles have performed for delighted audiences of all ages around the world and have received critical acclaim for their musicianship and ability to “channel” the four individuals who made a massive impact in the 60’s and ever since.

Got Live President, Wayne Coy, believes that the concept was long overdue. “As a huge Beatles fan myself, I felt there had to be another way to pay tribute to them beyond the same old re-creation of the 60’s that have been touring since Beatlemania was on Broadway in 1977. This show is decidedly different. Yes, John & George have passed on. But, what if they hadn’t? Would The Beatles have gotten back together again? And if they did, what would that concert have been like? This production answers that question. It is the concert we believe they would have done, filled with stories, laughter and of course, those incredible, timeless songs that are so well loved.”

Well known for his portrayal of John Lennon in the acclaimed production “In the Spirit of Lennon”, Drew Harrison has been performing Lennon’s songs and telling his stories for well over a decade. The singer-songwriter also leads the premier Beatles Tribute Band, The Sun Kings, in the San Francisco Bay Area and currently performs over 100 shows a year both solo and with his band. Harrison has performed throughout the US, Europe and South America.

An accomplished acoustic bass player, Adam Joel mastered his craft left-handed to ensure his role of Paul McCartney would be as authentic as possible. His talent captured the producers of Las Vegas’ “Beatleshow Orchestra” where he performed for 10 years prior to joining “The Reunion Beatles Fantasy Tribute.”

A background that includes record deals with Atlantic Records and performances spanning the globe including Germany, Holland, Austria, Denmark, United Kingdom, Ireland, Israel, South Africa and the U.S., Nick Bold’s musical ability speaks for itself. Bold wrote and recorded two albums for “Virginia Wolf”, of which he was an original band member. Appearing on the British TV hit “Stars in Their Eyes”, Bold’s impeccable impression of George Harrison immediately earned him critical acclaim and led to his performing in multiple Beatles performing, ultimately leading to “The Reunion” tour.

Having studied classical, jazz and composition on full scholarship in college, Carleton has been an accomplished musician for over 40 years. Carleton is a column writer for “Guitar Player Magazine” and is a well-known percussion instructor in the Bay Area. His YouTube instructional videos continue to attract viewers and feature the distinct Ringo style.

Beginning his musical quest in the 70’s Cosentino has shared his talent around the globe as Musical Director and performer for a variety of shows. Having studied acoustic and electric Pianos, the clavinet, synthesizers and Hammond B3 Organ, Cosentino’s depth of musical knowledge and experience provides him with the perfect background to be featured in The Reunion Tour on keyboards and vocals.